With the increasing degree of globalization, it is imperative that business leaders are exposed to and understand the different cultures and societies that exist in the world.

Wharton’s MBA International Week 2016 kicked off on the eve of Election Day, as one of the most contentious U.S. presidential races in recent history came to a close. The timing of this week-long celebration of cultural diversity wasn’t intentional, but it proved to be fortuitous.

Designed to promote conversation on culture and leadership, the series of events provided a much-needed forum for students to come together amid a climate of uncertainty and division across the nation.

“We are fortunate to have these international events this week,” said Howie Kaufold, Vice Dean of the MBA Program. “Many of us in the United States feel threatened by difference instead of feeling enriched by it … We are committed to keeping this a place of open expression for everyone.”

In collaboration with the Return on Equality Coalition (ROE), Storytellers, the Wharton Journal, Wharton International Clubs, and Penn Global Programs, the Wharton Graduate Association (WGA) planned out the events with a focus on “Shattering Stereotypes Through Leadership.” Through the week, Return on Equality also featured a series of stories from international students who exemplify that theme.

“One of the main objectives of the International Week is to make our colleagues to get out there, to do unusual things. To go hear from and reach out to people who are different from them. To be or become international, which I believe is a quality, a mix of cultural openness and innate curiosity about the world and about the others,” said Alexandre Carneiro Nogueira, WG’17, vice president of WGA International and social chair for WHALASA.

This cultural competence and appreciation is also necessary for a business school that is preparing the business leaders and innovative thinkers of the world for tomorrow.

“With the increasing degree of globalization, it is imperative that business leaders are exposed to and understand the different cultures and societies that exist in the world,” said Dan Kimani, WG’18, who moderated the “Ask Me Anything” India and Africa panel.

“International Week allows the Wharton community, which is already very international in and of itself, the opportunity to immerse itself more deeply in the diverse cultures of their fellow classmates.”

Here are a few highlights from the week:

Succeeding in the U.S. as an International Leader 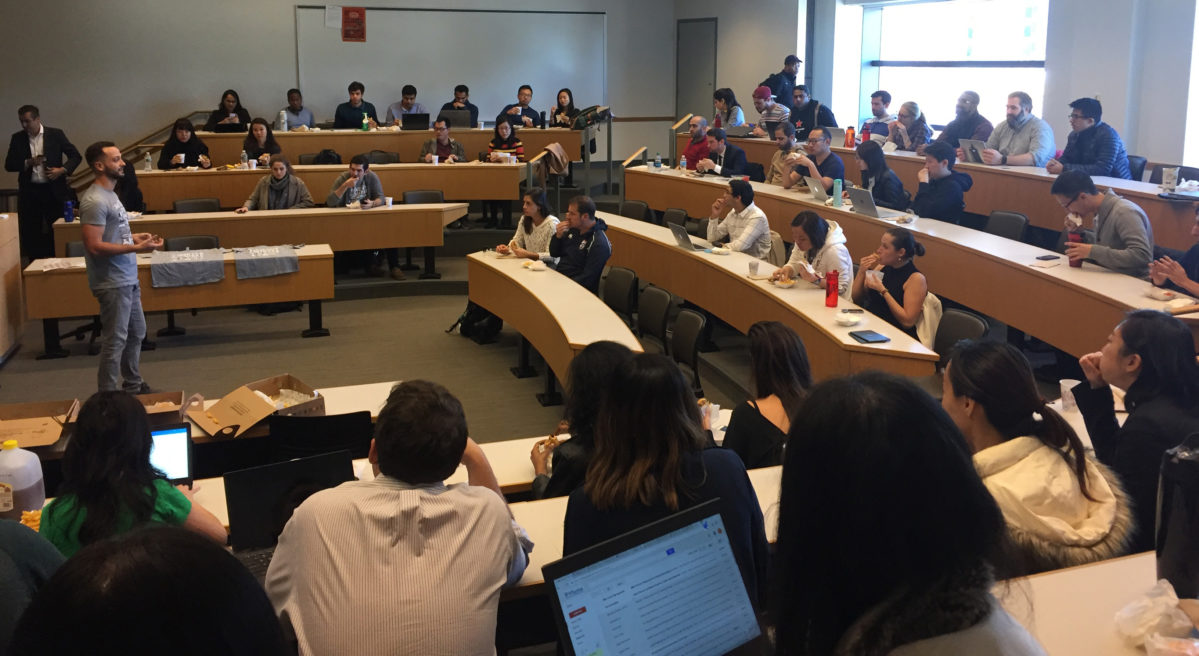 The week started strong with a professional panel in Huntsman Hall that featured two distinguished international guests who shared their perspective of what it’s like and what it takes to succeed in the United States as an international.
Bahige El-Rayes, Partner at A.T. Kearney in New York, hails from Lebanon, and Fernando Fiuza, Managing Partner at TRX Investments in Miami. El-Rayes, came to the States from Brazil.

The event drew about 70 students, both international and from the U.S., who were very engaged throughout the discussion. Panelists shared their reasons to pursue a career in the U.S. vs. their home countries, the challenges they faced and overcame by doing so, and their tips for students thinking of pursuing a similar path.

“Throughout the conversation with the panelists, it became clear that ‘risk taking’ is the single most important trait that helps them to differentiate one candidate from another in recruiting new hires, and they encouraged students to do so going forward in their career,” said Nacitta Kanyandara, WG’17, co-president of Wharton’s Southeast Asia Club.

“What I took away from it is that you should take advantage of the opportunities that lie in front of you and that you’re truly passionate about, even if it means that the path you choose isn’t one that’s traditionally deemed ‘safe’ in terms of job security, prestige/brand recognition, or compensation.”

Become a Leader in Baklava Preparation 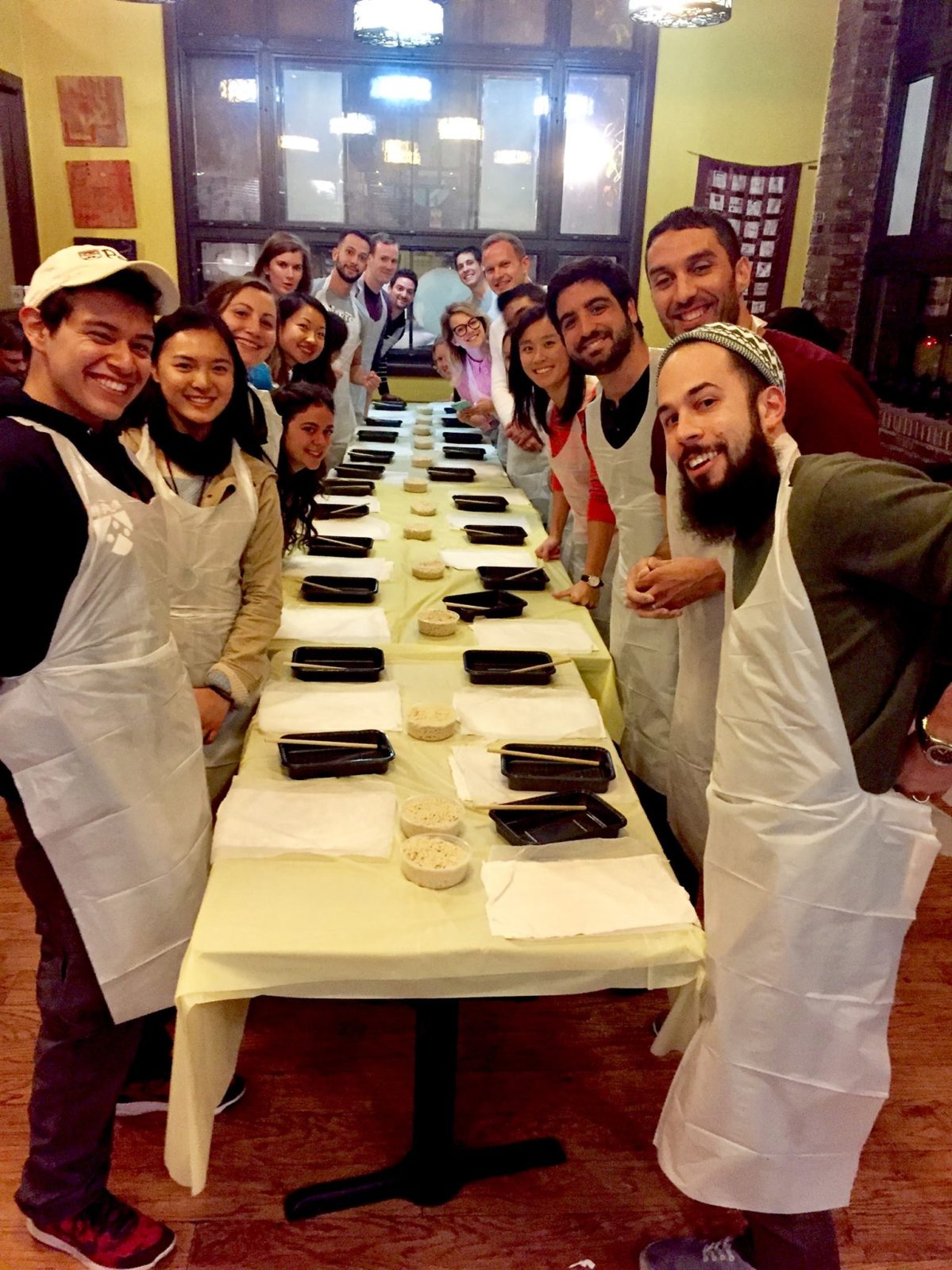 About 25 MBAs signed up for a special Monday night class you won’t find on the Wharton curriculum: baklava making. They headed down to Manakeesh Cafe Bakery at the corner of 45th and Walnut where head pastry chef Fouad Aoudia taught them the art of preparing the rich, sweet middle eastern dessert. The students enjoyed a Turkish coffee tasting and, of course, the fresh baklava they prepared. 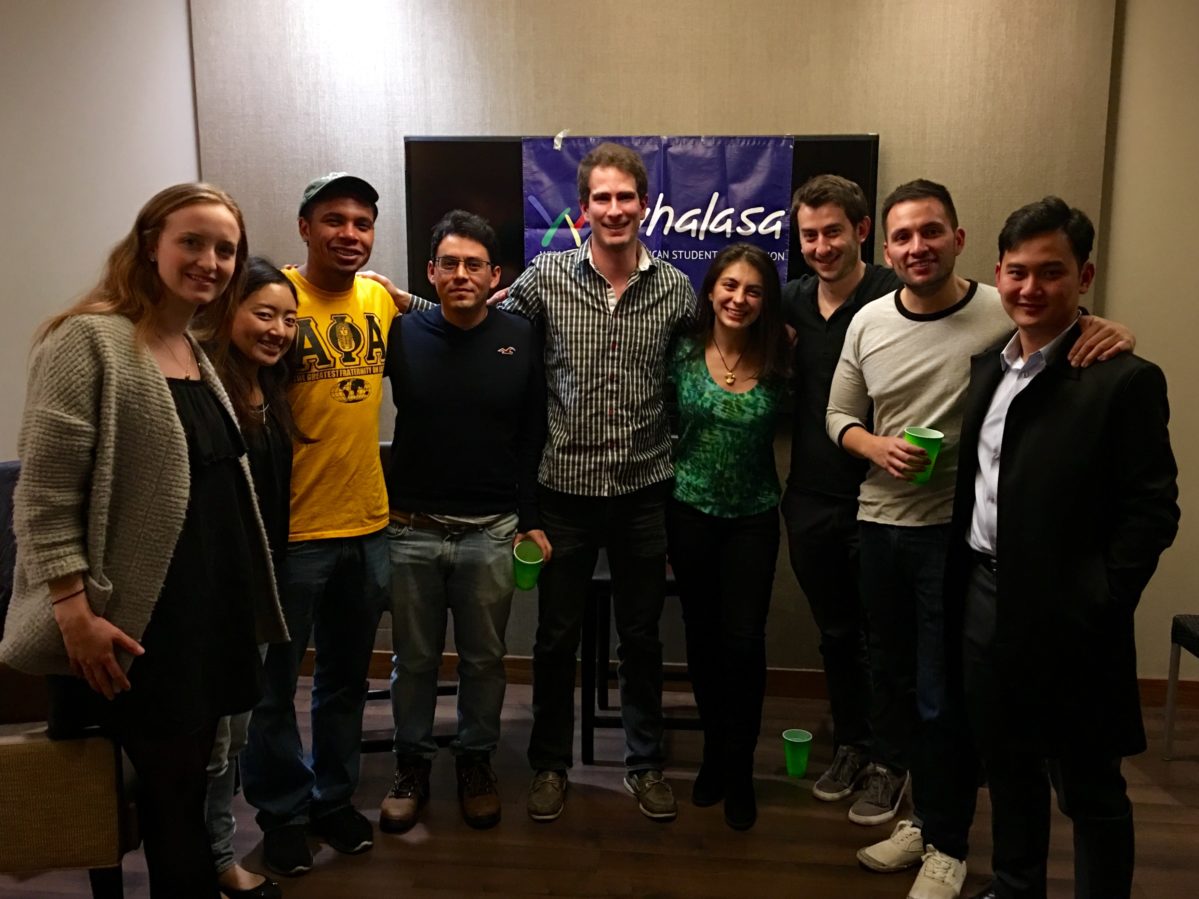 Members of WHALASA invited classmates to join them at 1700 Chestnut St. to enjoy some Latin American drinks and learn more about the Peace Process in Colombia and why the “historic peace agreement” with FARC rebels was recently voted down.

“Violence in Colombia is not black or white,” said Anne-Marie Firth, WG’18, who serves on the WHALASA Board. “It’s often easy to condemn the country for having voted against peace in its most recent referendum, but a look at recent history makes people understand that this is much more complicated than that.”

Ask Me Anything – Africa and India 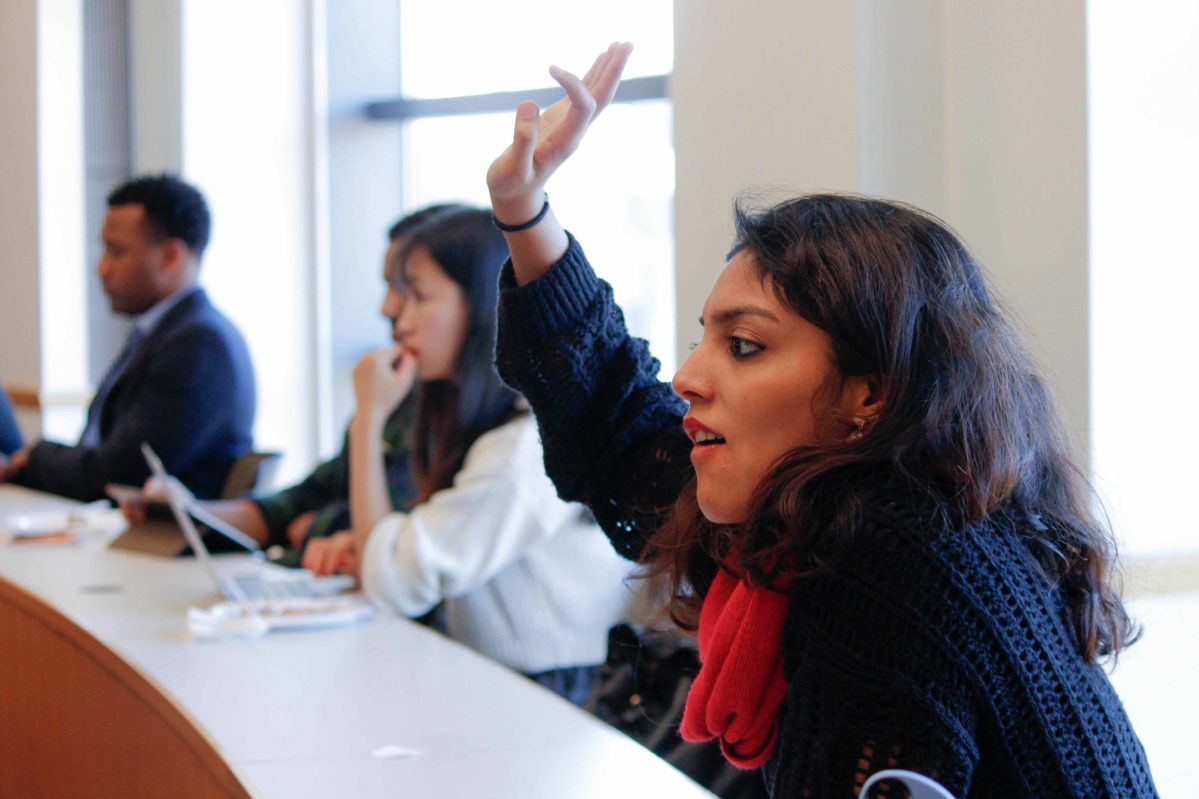 The topic was serious but plenty of laughter echoed from the third-floor classroom in Huntsman Hall where more than 50 students gathered on Nov. 8 for the “Ask Me Anything” India and Africa panel discussion.

“This week is about celebrating being international, but it’s also always an opportunity to educate,” said Adwoa Konadu Perbi, WG’18, who helped organize the event. “The questions ranged from serious to more social and fun topics, but open communication was the most important thing.”

The organizers encouraged students to ask any burning questions they had about Africa and India — no matter how controversial the topic — either anonymously through Poll Everywhere or by raising their hands.

Sponsored by the Wharton German Club 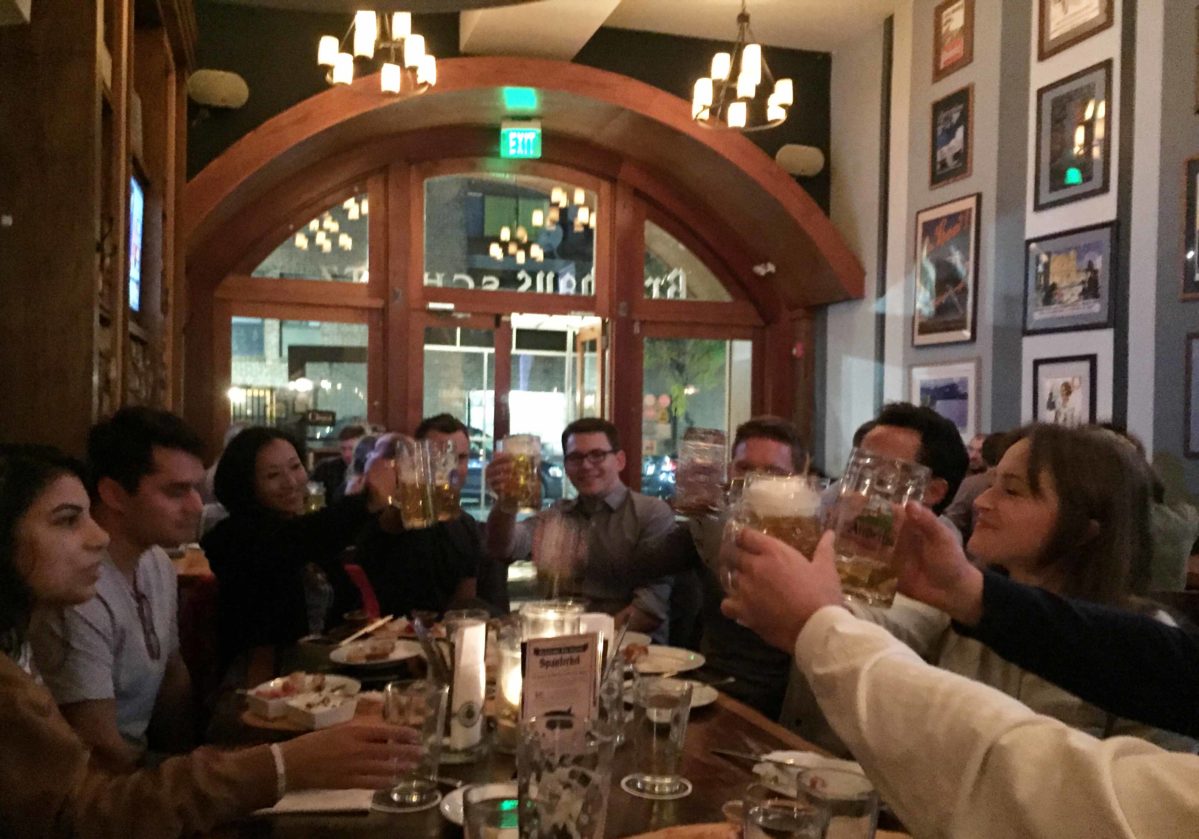 Tuesday night, the Wharton German Club organized a Stammtisch — a friendly get-together — open to everyone interested in Germany and German culture. A few Penn undergrads joined the first- and second-year MBA students at Brauhaus Schmitz on South St. to network and mingle.

“We enjoyed a variety of German dishes and some of Bavaria’s best brews while reminiscing about this year’s Oktoberfest Trek to Munich and discussing current events and employment opportunities in Germany,” said Matthias Gerg, WG’17, co-president of the Wharton German Club. 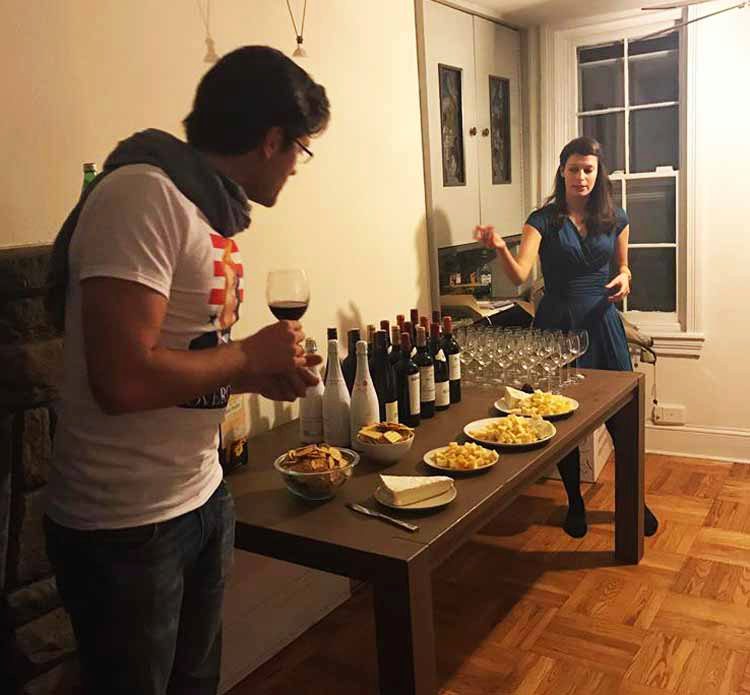 Europa! Board Member and certified wine expert Reka Birton, WG’17, hosted an informal get-together for classmates interested in learning the basics of wine tasting. Attendees enjoyed a wine selection from regions all over Europe and took their first tasting notes on the experience.

Hosted by the Wharton Graduate Association and Penn Global
A renowned expert in the intercultural theory field, Dr. Rudie Altamirano hosted a seminar in Huntsman Hall on Intercultural Communication Theory for Leadership. “The rapidly diversifying face of the United States and the shrinking global economy require that we are able to manage intercultural relationships from different backgrounds,” said Dr. Altamirano, the Director of International Student and Scholar Services. 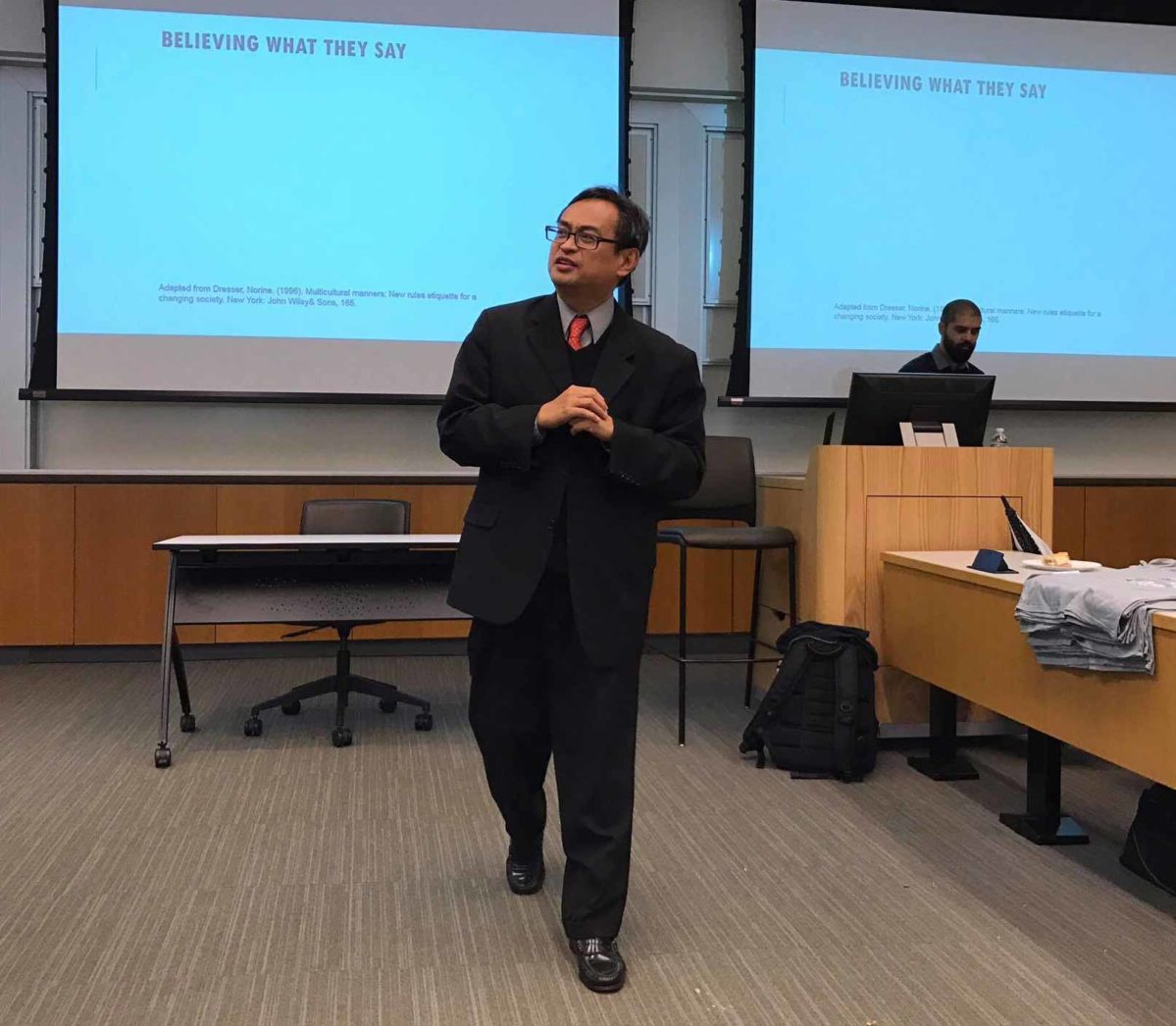 “Many organizations have now become multicultural and global, with individuals coming from all over the world,” he said. “This makes for a very diverse, vibrant community — and at times, a rather confusing one.”

In his talk, he stressed the importance of promoting intercultural competence in the world environment and the need for cultural and emotional intelligence to succeed as a leader. “You can have all the qualifications in the world, but it comes down to human etiquette and respect of cultural differences,” Dr. Altamirano said. “That can make or break a deal.”

Sponsored by the Wharton Japan Club 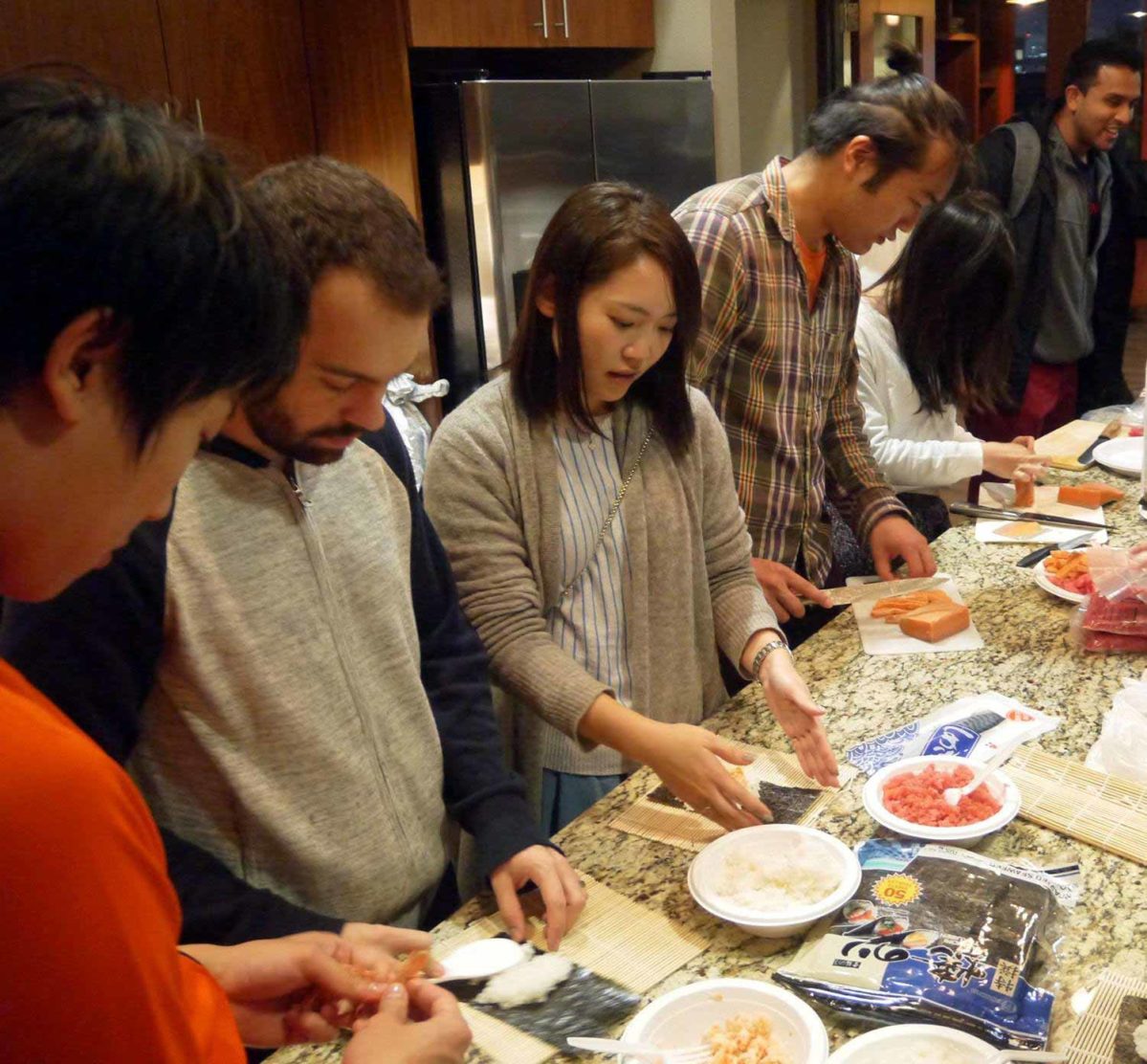 In spite of the rain, more than 60 people trekked down to 2116 Chestnut for the Japan Club’s sushi-making class. “We all had a good time making homemade sushi with fresh fish all the way from Alaska and some authentic Japanese sake,” said Eriko Matsumoto, WG’17, co-president of the Wharton Japan Club. “It was a great opportunity to share real Japanese food culture with the Wharton community.”

Hosted by Storytellers, ROE, and WGA 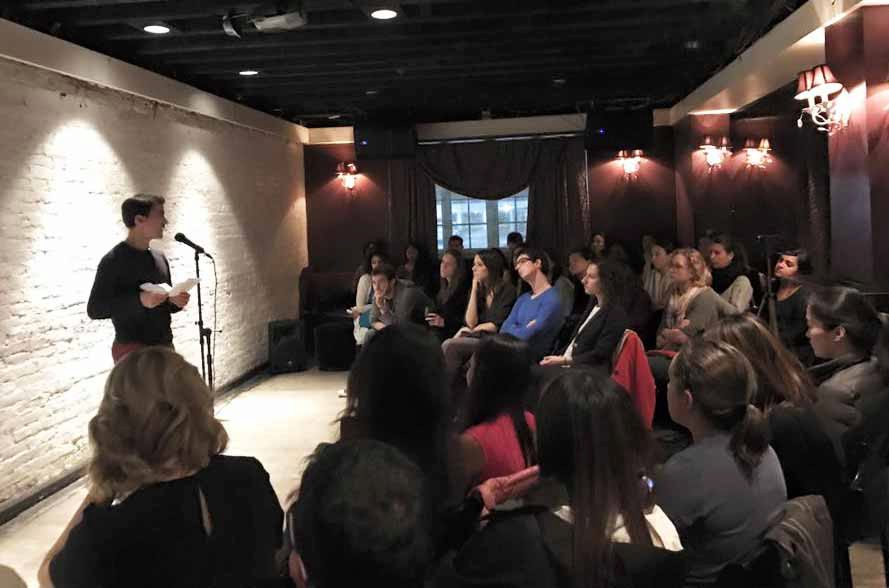 At the International Storytellers event on Wednesday night at Time, Storytellers Club, ROE, and WGA International teamed up for a night of stories about “home” with 10 featured storytellers. “Our classmates came to tell stories about what home means to them in an event that turned up to be delightfully funny and touching at the same time,” said Alexandre Carneiro Nogueira, WG’17, vice president of WGA International and social chair for WHALASA. “The venue was at full capacity. It was Wharton celebrating its international diversity at its best.”

The “Model Minority” Speaks Out: A Dialogue on Asians in America 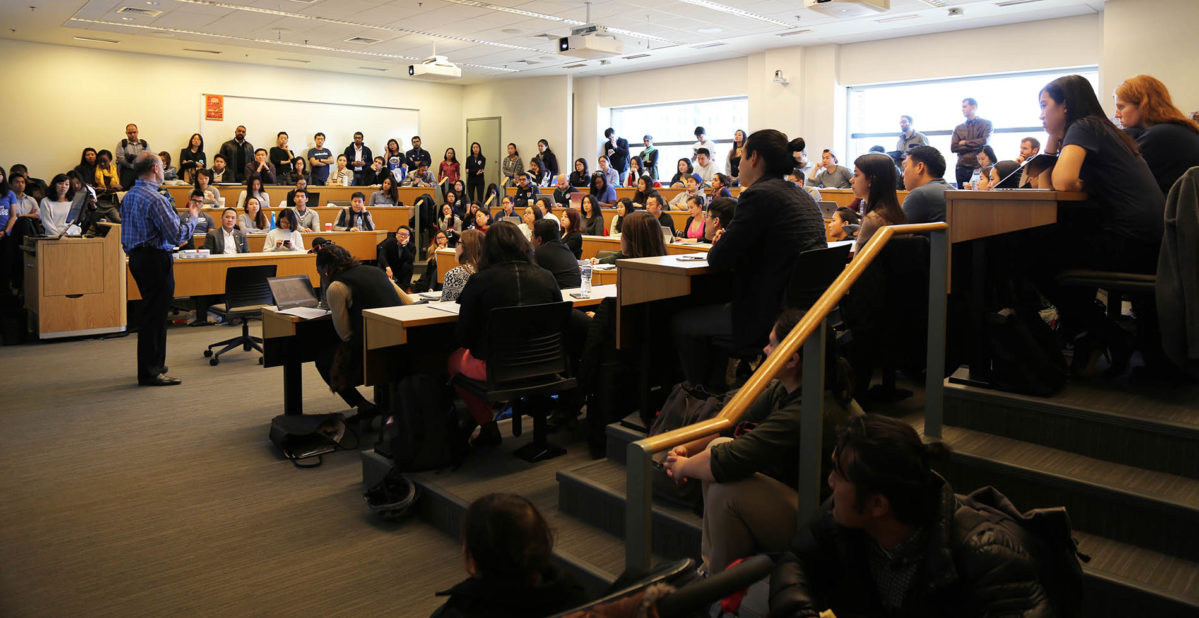 MBA students leaned against walls and sat on stairs in an overflowing Huntsman Hall classroom on Nov. 10 to take part in “The ‘Model Minority’ Speaks Out: A Conversation on Asians in America.” The event was long scheduled as part of Wharton International Week, but took on a more urgent tone after the U.S. presidential elections last week.

“We’ve been preparing for this for a month, and we’re happy it’s happening now. It’s not only about Professor Linneman’s remarks, but also about how we are treating each other in this community,” said co-organizer James Gong, WG’17, of the GCC. “I didn’t grow up here, and one thing I find fascinating in this country is that we have different backgrounds but can come together to talk about it. Through this communication we are able to learn about and better understand each other.”

Origins of ISIS and the Syrian Conflict

Sponsored by MENA and the Wharton Politics and Public Policy Club

Later that afternoon, Prof. Max Abrahms, C’00, a professor of terrorism at Northeastern University, discussed his latest research on terrorist groups and the roots of ISIS and the other terrorist organizations involved in the Syrian civil war.

“Prof. Abrahms explained why the conventional wisdom on ISIS is wrong and that the infamous terrorist organization may not be as effective as once thought,” said Patrick Elyas, WG’18, who serves as an officer for the MENA Club. “He demonstrated that ISIS weakened itself by publicizing its most brutal acts of violence against civilians, which caused a backlash from regional governments and popular opinion that cut off ISIS’ sources of funding and new recruits and eventually led to the loss of significant amounts of territory.” 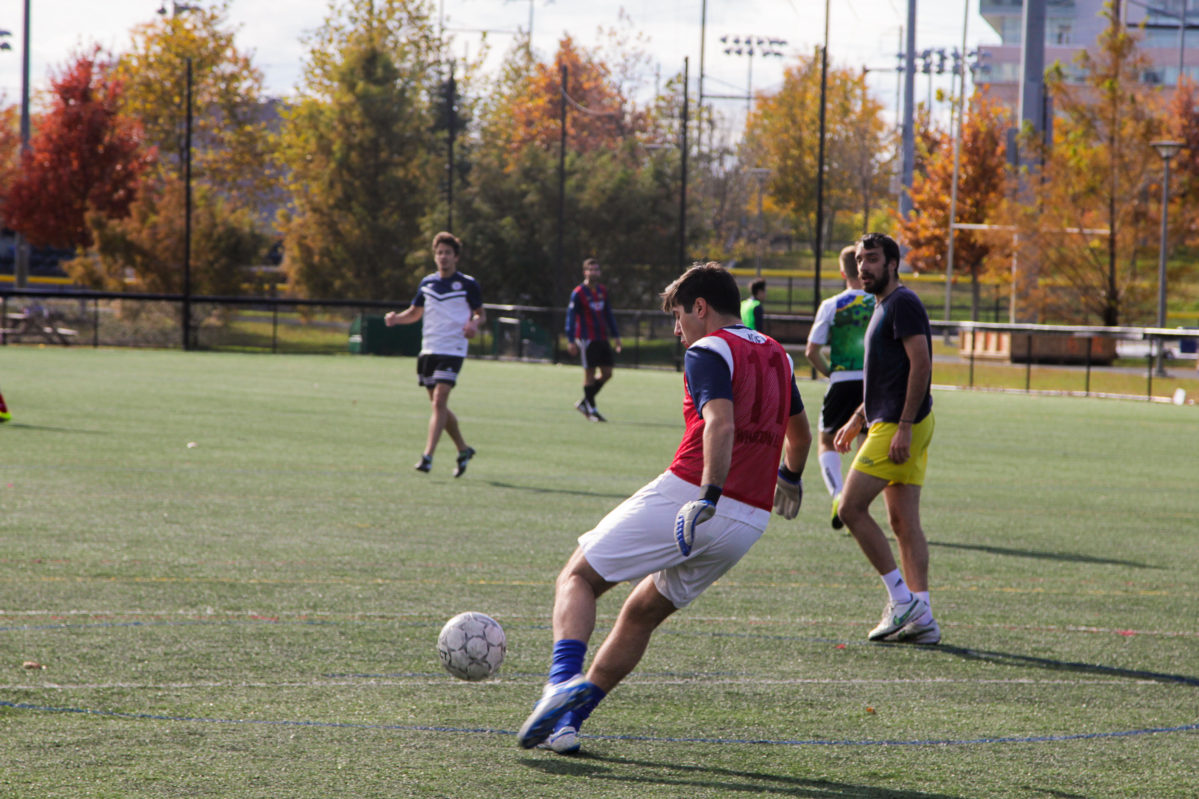 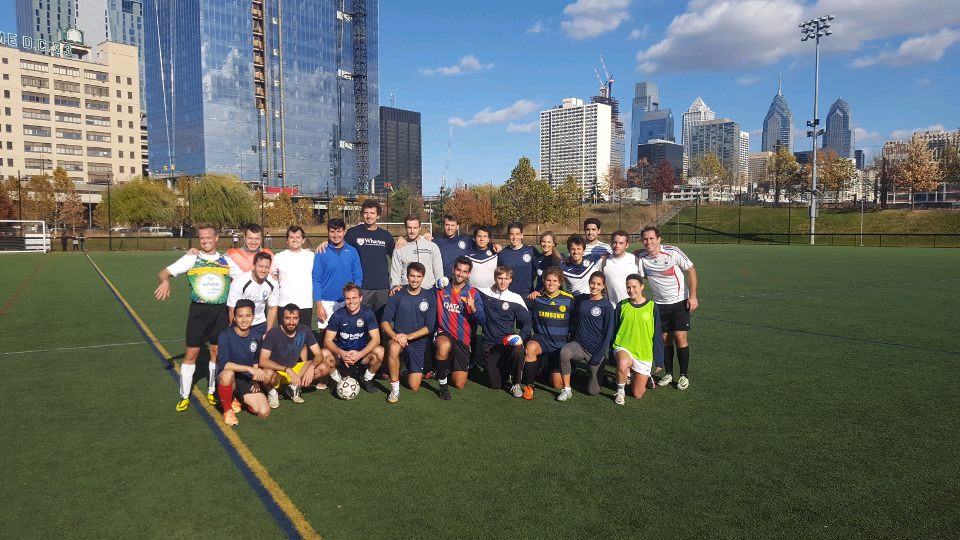 International Week came to a close Friday at noon, as the Europe Club faced off against WHALASA at Dunning-Cohen Champions Field for this Wharton FC tradition. The crowd clamored as Europa claimed a 2-1 victory in the El Clasico soccer match.